New Year has come and people all over the world are enjoying the New Year 2012. but for many people it might be hard to forget the some of the famous events that happened in 2011. As we know that "Today's News is Tomorrow's History". So let's look at some of this history of some famous event in 2011. 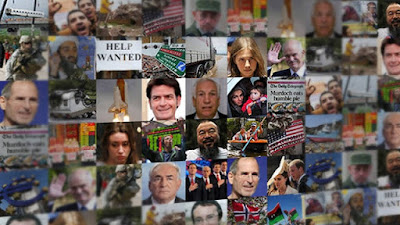 JANUARY:
January 9-15 - Southern Sudan holds a referendum on independence. The Sudanese electorate votes in favour of independence, paving the way for the creation of the new state in July.

January 11 - Flooding and mudslides in the Brazilian state of Rio de Janeiro kills 903.

January 24 - 37 people are killed and more than 180 others wounded in a bombing at Domodedovo International Airport in Moscow, Russia.


FEBRUARY:
February 11 - Arab Spring: Egyptian President Hosni Mubarak resigns after widespread protests calling for his departure, leaving control of Egypt in the hands of the military until a general election can be held.


MARCH:
March 11 - A 9.1-magnitude earthquake and subsequent tsunami hit the east of Japan, killing 15,840 and leaving another 3,926 missing. Tsunami warnings are issued in 50 countries and territories. Emergencies are declared at four nuclear power plants affected by the quake.

March 15 - Hamad bin Isa Al Khalifa, King of Bahrain declares a three-month state of emergency as troops from the Gulf Co-operation Council are sent to quell the civil unrest.

April 29 - An estimated two billion people watch the wedding of Prince William, Duke of Cambridge and Catherine Middleton at Westminster Abbey in London.

May 1 - U.S. President Barack Obama announces that Osama bin Laden, the founder and leader of the militant group Al-Qaeda, has been killed during an American military operation in Pakistan.

May 16 - The European Union agree to €78 billion rescue deal for Portugal.

May 20 - Mamata Banerjee was sworn in as the first woman and 11th Chief Minister of West Bengal.

June 5 - Yemeni President Ali Abdullah Saleh travels to Saudi Arabia for treatment of an injury sustained during an attack on the presidential palace.

July 9 - South Sudan secedes from Sudan, per the result of the independence referendum held in January.

July 13 - A series of bomb blasts in Mumbai occurred at the Opera House, Zaveri Bazaar, and Dadar West localities, leaving 26 killed, and 130 injured.

July 22 - 76 people are killed in twin terrorist attacks in Norway after a bombing in the Regjeringskvartalet government center in Oslo and a shooting at a political youth camp on the island of Utøya.

July 31 - In Thailand over 12.8 million people are affected by severe flooding. The World Bank estimates damages at 1,440 billion baht (US$45 billion). Some areas are still six - feet underwater, and many factory areas remained closed, at the end of the year. 790 people are killed, with 58 of the country's 77 provinces affected.


AUGUST:
August 5 - Juno, the first solar-powered spacecraft on a mission to Jupiter, is launched from Cape Canaveral Air Force Station.

September 19 - With 434 dead, the United Nations launches a $357 million appeal for victims of the 2011 Sindh floods in Pakistan.


OCTOBER:
October 4 - Mogadishu bombing: 100 people are killed in a car bombing in the Somali capital Mogadishu.

October 20 - Arab Spring and the Libyan civil war: Libyan leader Muammar Gaddafi is killed in Sirte, with National Transitional Council forces taking control of the city, and ending the war.

October 23 - A magnitude 7.2 Mw earthquake jolted eastern Turkey near the city of Van, killing 604 people, and damaging about 2,200 buildings.

October 31 - Date selected by the UN as the symbolic date when global population reaches seven billion.

October 31 - UNESCO admitted Palestine as a member, following a vote in which 107 member states supported and 14 opposed.

November 26 - The Mars Science Laboratory rover Curiosity, the most elaborate Martian exploration vehicle to date, is launched from the Kennedy Space Center. It is slated to land on Mars on August 5, 2012.


DECEMBER:
December 15 - The United States formally declares an end to the Iraq War.