If you are looking for a way to bring nature indoors, you definitely need to look into getting a bonsai tree. Bonsai trees are beautiful and add a refreshing feel to a room. They are fun to take care of and they even make great gifts. It is believed that growing bonsai trees first started during the Han Dynasty (206 BC~220 AD) in China. Later on it came to Japan where the art of bonsai tree growing was perfected. Bonsai tree growing is nature captured in miniature, thus, the small trees in pots.

A bonsai tree has a unique beauty. It is almost like you take your favorite tree that you enjoy sitting under and shrink it down small enough to set on your table. So we have collected 15 different type of these Bonsai trees that you might like... 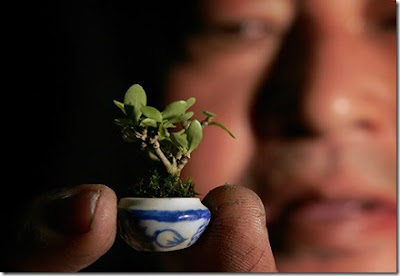 What’s smaller than a miniature tree? A miniature miniature tree. This masterpiece measures 22mm and it was obtained from a Malaysian local species called “water jasmine” – the only species that can apparently be made so small. Creator Kuah Tee Teong claims that it may be the world’s smallest bonsai, since the standard measure of a miniature bonsai is 10cm. Kuah doesn’t strive for popularity and didn’t register his creation in the Worlds Book of records, neither is he planning to sell his tiny trees. His philosophy: ‘’If I sell, then I’ll have nothing to show.” He also prunes animal shaped trees that look like dogs, snails or octopuses.

2. Music from a Bonsai 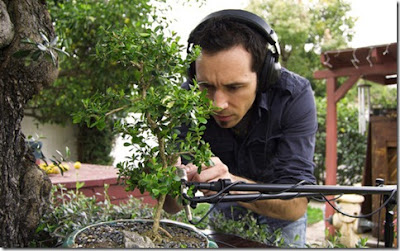 Diego Stocco is not a bonsai grower, hasn’t won any bonsai competition award, but he is, in his own unique way, a bonsai lover and tamer. He bought a bonsai tree and made it sing, proving that you actually can teach an old bonsai new tricks. Using a Røde NT6 microphone, some tiny transducers and a customized stethoscope, Stocco recorded an experimental piece played exclusively by the bonsai’s small leaves and branches. He also used a piano hammer, a paint brush and different bows to obtain different sounds from the tree. Don’t be scandalised if it seams from this video that he is somehow torturing the poor little tree. No bonsai was damaged during the experiment and, as you know, art demands sacrifices. 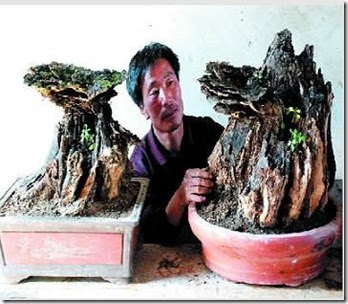 This is an extremely rare ganoderma lucidum cultivated bonsai, with an impressive diameter of 90cm. The successive layers and crown shaped cap make it unique in the world. Known as “fairy herb”, Gandorema lucidum has been used for medicinal purposes in traditional Chinese medicine for more than 2000 years. It is one of the oldest mushrooms to have been used in disease treatments and , due to it’s presumed health benefits and apparent absence of side effects, it is known as one of the most powerful herbal substance in East Asia. In Chinese culture, it is also considered a good luck, beauty and longevity charm. The plants health benefits and spectacular shapes and colours saved it an important place on the bonsai market as well. 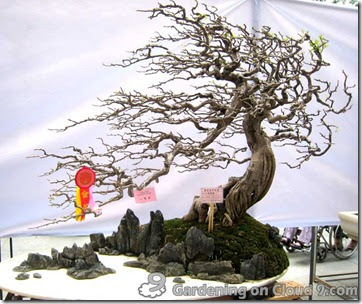 “Penjing” is the Chinese extension of bonsai art and it can be literally translated “landscape in a pot”’. The chines art focuses more on creating a convincing miniature landscape than shaping the perfect miniature tree as Japanese bonsai growers strive to obtain. Nonetheless, the value of an awarded penjing is given by the way it looks with naked branches, when not attired in fabled leaves and flowers. The assembly in the image is called 大風驚濤, which literally means “harsh wind severe waves” and it was awarded at the Guangzhou Penjing Exhibition in China, the biggest lingnan (southern style) penjing exhibition since the founding of the country. 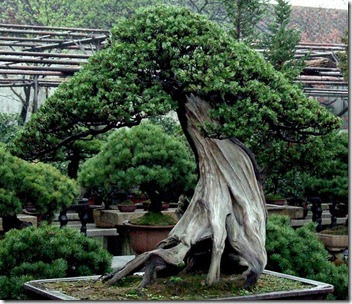 The oldest known bonsai trees still living can be found in a private restaurant garden in Tokyo, Japan. The 400 to 800 years old trees in Happo-en Garden ar an attraction for any bonsai lover visiting Tokyo. Every tree is grown in era-specific pots that are often as valuable as the trees themselves.

The practice of potted trees gose way back to the Egyptian Era, 4000 B.C. Inhareted images depict miniature trees cultivated in rock containers. Pharaoh Ramesses III is known to have donated several olive trees and other miniature plants to various temples. In the Indian Pre-Common Era several plant species were grown in a “”bonsai manner” for medicine and nutrition purposes. 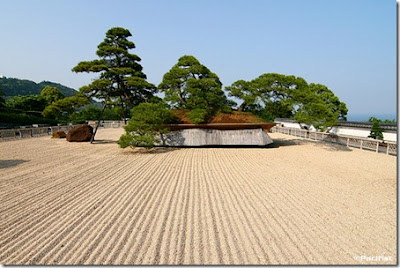 This 600 year old Japanese bonsai is presumably the biggest bonsai tree in the world, according to the staff of Akao Herb & Rose Garden in Atami, Japan. Sure, the title is somehow paradoxical since the main quality of bonsai trees is being small. But, after all, if bonsai means “tree in a pot” it doesn’t metter how big the pot is, especially if it contains an impressing 5 meter tall and 10 meter wide ancient red pine bonsai like this one. 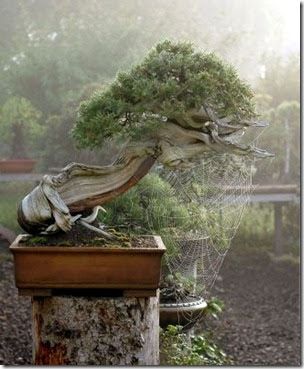 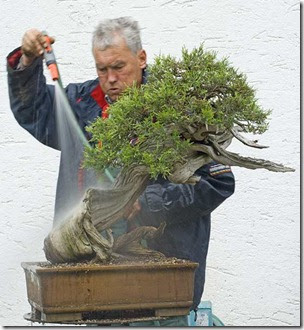 Walter Pall is a kind of bonsai rock-star among the culture’s enthusiasts. He has received several dozens national and international awards for his beautiful, dramatic bonsai. He has won the most prestigious Crespi Cup Award of Italy for his well known Rocky Mountain Juniper, and has come in among the top six, every time he has entered. He has also won second and third and other places places in the Gingko Cup Awards of the Belgium bonsai competition held every two years. The most controversial information about Walter pall is that, although world renown, he considers himself an amateur working professionally. That’s because he styles trees for his own amusement and not for commercial purposes. In time he managed to put together one of the most comprehensive bonsai collections around. 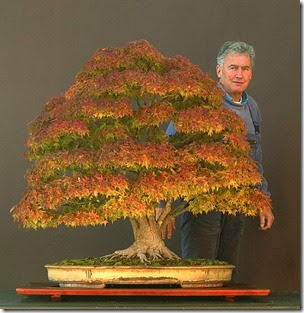 Another famous piece from Walter pall’s collection is this Sycamore Maple that won the Bonsai Today / Art of Bonsai Photo Contest. Pall was one of the first Europeans to work with indigenous species, which he collects in his beloved Alpine mountain.s He now owns a collection of about 1000 quality trees in varying stages of development and keeps a store reserve of about 1000 handmade pots to compliment the bonsai. Besides his famous conifers he is also well known for his beautiful deciduous trees. Walter’s bonsai usually are strong, powerful trees which he frequently forms in natural shapes. The longer he has been involved with tree development, the more he has moved away from traditional bonsai styling to his own concepts of design. 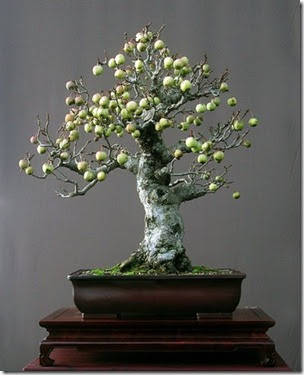 This is my personal favourite from Pall’s collection: an incredibly sweet 65 cm high apple tree. I have no idea how anyone that sees it live could resist not to taste those tiny apples, but I guess Mr. Pall keeps it in a safe place, away from leering guests. Fruit trees training is an ascending trend among bonsai growers. The fascinating part about it is that the fruits are indeed edible, especially those belonging to the citrus category. Common fruits that can be obtained in small size include: cherries, apples, lime, lemons, tangerine and figs. The bonsai fruit tree success strongly depends on meteorological and topographical factors, like humidity, temperature and soil. 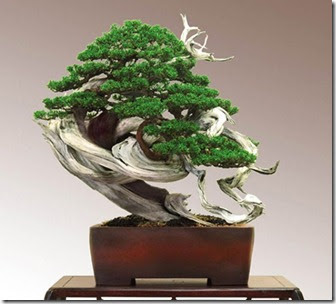 The Chines Juniper is a very loved and popular tree among bonsai professionals and amateurs alike. Due to the woods malleability, it can be stylised into beautiful and interesting shapes. Like this one belonging to Enrico Savini from Italy, that has won several awards, including Ben Oki International Design Award in 2003 and Bonsai Clubs International People’s Choise Award 2008. Savini says he fell in love with bonsai art at age ten and his first tree, a Prunus mume that only survived a few months, was a gift from his grandma. “ I couldn’t forgive myself for that failure, so I took it as a personal challenge, my entire career has been a continuous personal challenge.”


11. Dan Robinson, The Picasso of Bonsai 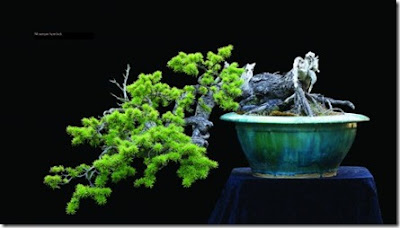 This perfect Mountain hemlock expresses Dan Robinson’s virtuosity as a bonsai artist and his respect for the nature’s own ways. Known as a pioneer in bonsai art, or as the Picasso of bonsai, he practices an preaches techniques inspired by the ancient Japanese ways. This is one of the many amazing captures pictured in the book Gnarly Branches, Ancient Trees: The Life and Works of Dan Robinson – Bonsai Pioneer made ]n collaboration with photographer Will Hiltz. 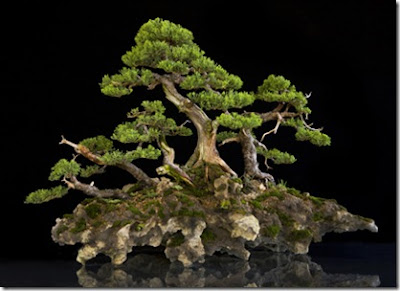 This work of art belongs to Nacho Marin, a Venezuelan Fine Arts graduate who is fascinated by the infinite possibilities of taming and manipulating trees. In his quest to recreate a natural environment, he also takes great care so that the shape and mood of the final product reflects his artistic vision. No wonder that his Junipero San Jose won the flattering title of ”Most artistically innovative entry of all entries from all categories” at The Art of Bonsai Contest 2008. 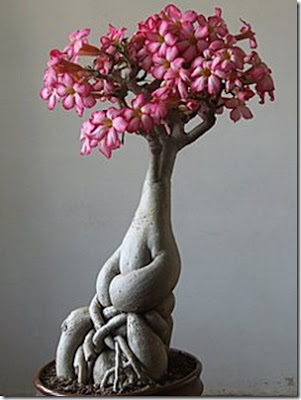 Not as popular as junipers, but unanimously loved for their delicacy and frailness, flower bonsais can come up in extraordinary forms. Mr. Jai Krishna Agarwal from India has about 100 specimens in his collections and he especially loves adenium flowers. Why? Because their trunks often remind the shapes of the human body . The effect is surrealistic to say the least, this beautiful example shown here brings to mind some elaborate fauvist sculpture. 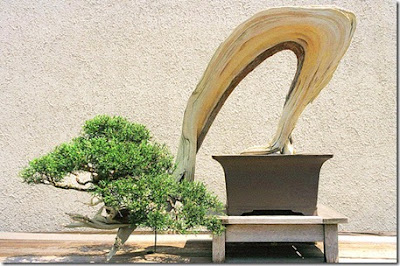 A Juniper bonsai collected, designed and developed by Harry Hirao and displayed at the National Bonsai and Penjing Museum at The United States National Arboretum. This very old, semi-cascade style bonsai was probably collected in the White Mountains of California. The shari (deadwood on the trunk) is very prominent on this bonsai, leaving only one stripe where the tree is connected between its leaves and the roots.

The esthetics behind this type of contorted and twisted trunk is called literati and it was influenced by the political and academic conditions in the Tang Dynasty period, when penjing was once widely practiced by the elites. Literati is a contemplative, lyrical style displaying tension (in the trunk) and release (in the cascading branches) like the universal law of Yin and Yang. 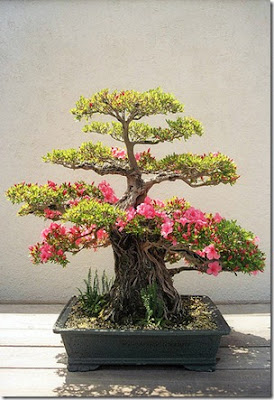 An old Azalea, probably a Satsuki type, from the Collection of the National Bonsai and Penjing Museum at The United States National Arboretum. Azaleas bloom in spring, their flowers often lasting several weeks. In Chinese culture, the azalea is known as “thinking of home bush” (xiangsi shu) and is immortalized in old poetry and contemporary stories.