Green Tea is one of the Marvelous Drink. Currently, tea in the form of green or black tea, next to water, is the most widely consumed beverage in the world. According to Chinese legends, tea was discovered by the Emperor Shen Nong in about 2700 BC, when a gust of wind blew tea leaves into a kettle of boiling water.

Teas contain polyphenols which act as antioxidants and exhibit numerous biochemical activities. Tea polyphenols consist mostly of catechins, the most powerful of which is epigallocatechin gallate (EGCG) which is found only in green tea. Since ancient times green tea has been considered a health-promoting beverage and currently researchers find more convincing proof of its healing qualities. 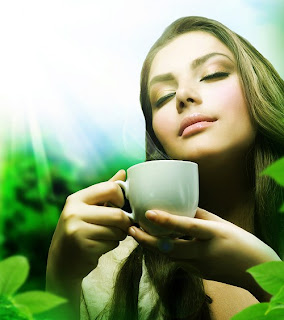 Based on the growing range of studies that research health properties of green tea, we have collected 20 benefits of drinking green tea regularly. Take a look...

Green tea may protect against death from all causes, especially cardiovascular disease. Japanese scientists analyzed data from a National Cohort Study that began in 1994 and had over 40,000 participants, age 40 to 79, who initially were free of stroke, heart disease and cancer. People were followed for up to 11 years.
Compared with participants who consumed less than 1 cup of green tea per day, those drinking 5 or more cups a day had a significantly lower risk of death from all causes, especially lower risk of dying from cardiovascular disease and stroke. The findings might explain in part the reason why the Japanese live longer than people in any other country. However, there was no cancer prevention benefit of green tea.

The main components of green tea that are thought to work on improving brain function are polyphenols, epigalochatechin-3-gallate (EGCG), a very strong antioxidant. The high use of oxygen during the metabolic processes leads to the generation of a large number of free radicals (highly reactive molecules). EGCG can penetrate the brain's blood barrier and is able to enact its antioxidative affects on the free radicals that cause damage in the brain.

There is strong evidence that green tea has fat-burning properties and promotes weight loss, especially when combined with increased physical activity and a healthy diet. Green tea polyphenols are known to increase the metabolism of fats by the liver (thermogenic effect), inhibit lipase (fat absorption enzyme) in the digestive tract, and provide a feeling of satiety and fullness. Green tea can reduce body weight in obese persons by increasing energy expenditure and fat oxidation.

Continuous ingestion of a green tea extract high in catechins promotes reduction in body fat, systolic blood pressure, and LDL cholesterol, that in its turn contributes to a decrease in obesity and cardiovascular disease risks.

It is believed that one of the underlying mechanisms by which green tea lowers blood cholesterol levels is by reducing lipids absorption in the digestive tract and promoting their excretion from the body.

Green tea has been traditionally used to control blood sugar. Recent evidence also suggests it may help regulate the blood sugar and reduce the risk for type 2 diabetes. People who drink more than 6 cups per day are less likely to develop diabetes than those who drink less than 1 cup per week. Green tea antidiabetic properties may be partly explained by its caffeine content.

Japanese researchers demonstrated that daily intake of green tea extract lowered the hemoglobin A1c level in people with borderline diabetes, that indicates the increased body's ability to utilize blood sugar. Hemoglobin A1c is a test that measures the amount of glycosylated hemoglobin molecules in red blood cells. These molecules attach to glucose and so people have more of them if they have more glucose in the blood.

Green tea may protect against heart disease. Green tea might explain the "Asian paradox" - when people living in Asian countries smoke cigarettes heavily, but have relatively low incidence of heart disease. The Japanese confirm that the more green tea people drink, the less likely they are to have coronary artery disease. Underlying mechanisms for this include vasculoprotective, antioxidative, antithrombogenic, anti-inflammatory, and cholesterol-lowering properties of tea flavonoids.

Japan scientists have discovered that people who consumed more than 2 cups of green tea a day had a 50% lower chance of having cognitive impairment, than those who drank fewer than 2 cups a day, or who consumed other tested beverages.

Green tea prevents tooth decay. It kills the bacteria that cause dental plaques and halitosis (bad breath) and increases the acid resistance of tooth enamel.

Green tea catechins have anti-bacterial, anti-viral and anti-fungal activities. These include some types of salmonella, influenza and herpes simplex. Its bacteria-destroying abilities can help prevent food poisoning. A component of green tea may be useful in treating severe sepsis, an abnormal immune system response to bacteria.

Green tea appears to support healthy liver and protect it from the damage by toxic substances such as alcohol. Men who drink more than 10 cups of green tea per day are less likely to develop disorders of the liver.

In the gastrointestinal tract, green tea was found to activate intracellular antioxidants and reduce inflammation. Drinking more than 10 cups per day may prevent chronic atrophic gastritis. Also, it may help reduce inflammation associated with Crohn's disease and ulcerative colitis.