12 Largest Stadiums in the World

A stadium is a place or venue for outdoor sports, concerts, or other events and consists of a field or stage either partly or completely surrounded by a structure designed to allow spectators to stand or sit and view the event. The size of the stadium does not only depend on the area it covers but also the number of spectators it can accommodate. So, here we have collected the top 12 largest stadium in the world. Take a look... 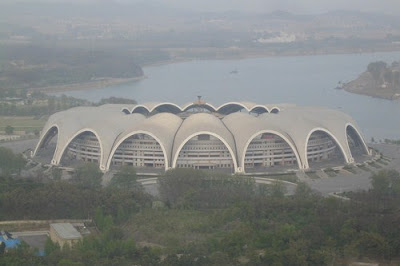 The Rungrado May First Stadium, or May Day Stadium, is a multi-purpose stadium in Pyongyang, North Korea, completed on May 1, 1989. The stadium can seat 150,000, which is the largest stadium capacity in the world and the world’s 12th largest sporting venue. While the stadium is used for sporting events, it is most famous as the site of massive performances and shows celebrating Kim Il-sung and the North Korean nation. In June–July 2002 it was the site of the colossal and meticulously choreographed “Arirang” gymnastic and artistic performance (often referred to elsewhere as “mass games”). 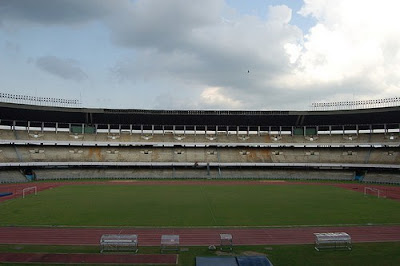 Salt Lake Stadium is a multi-purpose stadium in Bidhannagar, Kolkata, West Bengal. It is the second largest non-auto racing stadium in the world and the largest in the Indian sub-continent. It is currently used for football matches and athletics. The stadium was built in 1984 and holds 120,000 people in a three-tier configuration. 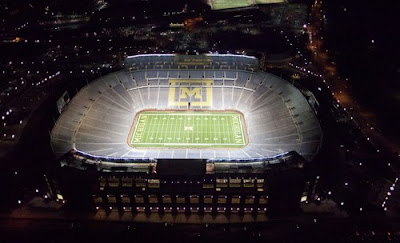 Michigan Stadium, nicknamed “The Big House,” is the football stadium for the University of Michigan in Ann Arbor, Michigan. Michigan Stadium was built in 1927 at a cost of $950,000 and had an original capacity of 72,000. Before playing at this stadium, the Wolverines played football on Ferry Field. Michigan Stadium is the largest stadium in the United States with an official capacity of 109,901. The football game attendance often exceeds 111,000 when band members, stadium staff, and others are added. 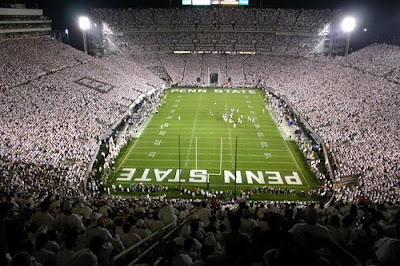 Beaver Stadium is an outdoor college football stadium in University Park, Pennsylvania, United States, on the campus of The Pennsylvania State University. It is home to the Penn State Nittany Lions of the Big Ten Conference. The stadium is named for James A. Beaver, a former governor of Pennsylvania (1887–91) and president of the university’s board of trustees. Beaver Stadium has an official seating capacity of 106,572, making it currently the second largest stadium in the Western Hemisphere and the fourth largest in the world. Beaver Stadium is widely known as one of the toughest venues for opposing teams in collegiate athletics. In 2008, Beaver Stadium was recognized as having the best student section in the country for the second consecutive year. 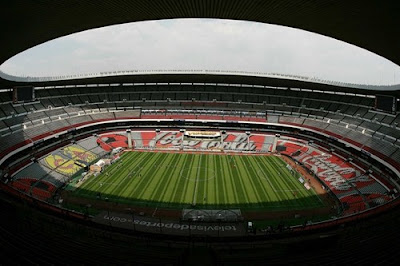 Estadio Azteca is a stadium in Santa Ursula, Mexico City, Mexico. It is the official home stadium of the Mexico national football team and the Mexican team Club América. The stadium was the venue for football in the 1968 Summer Olympics. With a capacity of 105,064, it is the largest stadium in Latin America, fifth largest in the world and the largest football-specific stadium in the world. 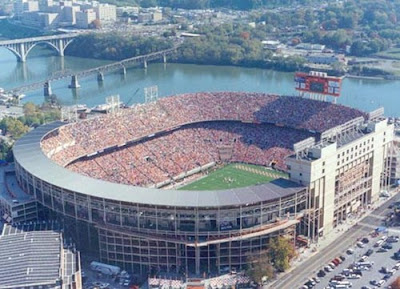 Neyland Stadium is a sports stadium in Knoxville, Tennessee, USA. It serves primarily as the home of the Tennessee Volunteers football team, but is also used to host large conventions and has been a site for several NFL exhibition games. The stadium’s official capacity is 102,455. Constructed in 1921, the stadium has undergone 16 expansion projects, at one point reaching a capacity of 104,079 before being slightly reduced by alterations in the following decade. Neyland Stadium is the third largest non-racing stadium in the United States, the sixth largest non-racing stadium in the world, and the largest stadium in the Southeastern Conference. The stadium is named for University of Tennessee football coach Robert Neyland . 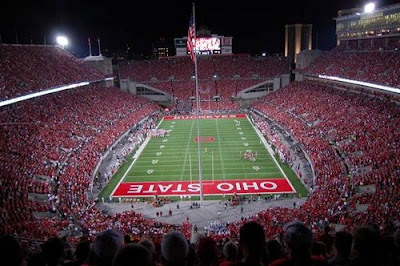 Ohio Stadium is the home of the Ohio State Buckeyes football team and is located on the campus of The Ohio State University in Columbus, Ohio. The stadium was added to the National Register of Historic Places by the National Park Service on March 22, 1974. With a capacity of 102,329, it is the fourth largest football stadium in the United States and the seventh largest non-racing stadium in the world. It is popularly known as “The Horseshoe” because of its open south end. 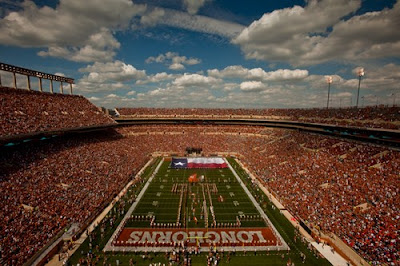 Darrell K Royal – Texas Memorial Stadium, located in Austin, Texas, has been home to the University of Texas at Austin Longhorns football team since 1924. The current official stadium seating capacity of 100,119 makes the stadium the largest football-only venue by seating capacity in the state of Texas, the largest in the Big 12 Conference, the sixth largest stadium in the NCAA and the United States, and the ninth largest non-racing stadium in the world. 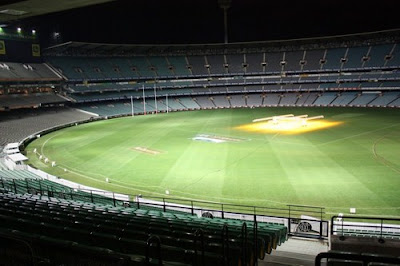 The Melbourne Cricket Ground (MCG) is an Australian sports stadium located in Yarra Park, Melbourne and is home to the Melbourne Cricket Club. It is the tenth largest stadium in the world, the largest in Australia, the largest stadium for playing cricket, and holds the world record for the highest light towers at any sporting venue. Until the 1970s, more than 120,000 people sometimes crammed into the venue – the record crowd standing at around 130,000 for a Billy Graham evangelistic crusade in 1959, followed by 121,696 for the 1970 VFL Grand Final. Grandstand redevelopments and occupational health and safety legislation have now limited the maximum seating capacity to approximately 95,000 with an additional 5000 standing room capacity, bringing the total capacity to just over 100,000. 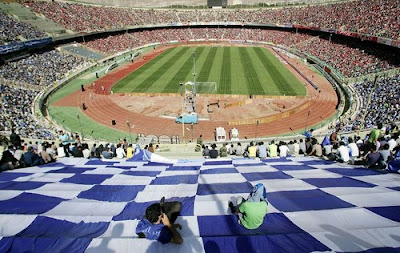 The Azadi Stadium is Iran’s national stadium and the largest in the country. The Azadi stadium officially has a capacity of 100,000 people and was built to host the 1974 Asian Games. The stadium is part of the much larger Azadi Sports Complex, and is surrounded by a rowing river, football training pitches, a weightlifting complex, swimming facilities and indoor volleyball and futsal courts, among many other amenities. Azadi Stadium is the fifth biggest association football stadium in the world, fourth in Asia and first in West Asia. 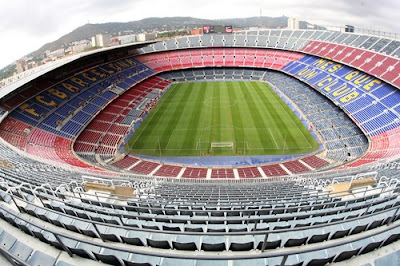 Camp Nou is a football stadium in Barcelona, Catalonia, Spain which has been the home of Futbol Club Barcelona since 1957. The Camp Nou seats 98,787, reduced to 96,336 in matches organised by UEFA, making it the largest stadium in Europe and the 11th largest in the world in terms of capacity. It has hosted numerous international matches at a senior level, including two UEFA Champions League finals and the football competition at the 1992 Summer Olympics. 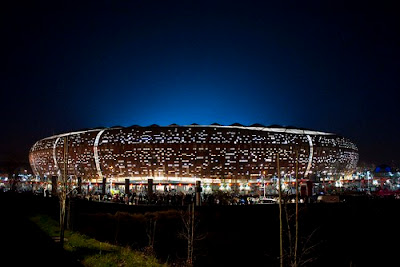 Soccer City, known as FNB Stadium for commercial purposes, is a stadium located in Nasrec, the Soweto area of Johannesburg, South Africa. It is located next to the South African Football Association headquarters (SAFA House) where both the FIFA offices and the Local Organising Committee for the 2010 FIFA World Cup were housed. Designed as the main association football stadium for the World Cup, the FNB Stadium became the largest stadium in Africa with a capacity of 94,736. However its maximum capacity during the 2010 FIFA World Cup was 84,490 due to reserved seating for the press and other VIPs. The stadium is also known by its nickname “The Calabash” due to its resemblance to the African pot or gourd.