We all have many little beliefs from our childhood and we completely believe that these beliefs are completely true. However, often we discover that these little facts we thought were true since childhood are actually nothing more than just a myth. So, here we have complied 52 popular myth which helps you to really re-evaluate what you think you know! Take a look... 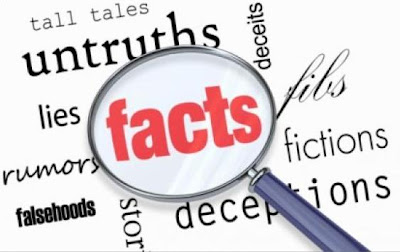 1. Contrary to the phrase "blind as a bat," bats are actually not blind, it's just that their eyes aren't as functional as their amazing hearing and smell.

2. Most meteorites are actually very cold when they hit the Earth.

4. Cracking your knuckles doesn't cause arthritis. It does however make you look like a total badass.

5. The red juice that comes out of raw meat isn't blood, it's a mixture of a protein called myoglobin and water.

6. The Great Chicago Fire was not caused by a cow kicking over a lantern, which was actually made up by a newspaper because it was a better story.

7. Humans actually have 5 kinds of tastebuds, the 5th is used for detecting savory flavors, like soy sauce or mushrooms.

8.The sun isn't yellow, it's actually white, but the light gets scattered in our atmosphere and becomes yellow.

10. Lemmings don't walk off cliffs on purpose. They are adorable though.

11. Men don't think about sex every 7 seconds, because that varies greatly from person to person and is almost impossible to measure.

15. The idea of being left or right brained making you artistic or good at math is a total myth.

16. The Bible actually never specifies what kind of fruit Adam and Eve eat from the tree.

18. Einstein did drop out of school, but he also had amazing grades.

19. Your hair and fingernails don't keep growing after you die.

20. According to the Red Cross, it's not that big of a deal if you eat right before swimming.

21. Watching too much TV doesn't affect your eyesight. It does however make you fat, depressed, and aggressive.

23. You can't see the Great Wall Of China from space. No Astronaut, according to NASA, and now also a Chinese astronaut himself, has ever seen it.

24. Touching someone who has poison ivy can't give you poison ivy. It has to come from the leaves.

27. You have way more than 5 senses. Scientists put the total somewhere between 14-20, depending on your definition of "sense."

28. The word "jihad" does not always mean "holy war"; literally, the word in Arabic means "struggle". While there is such a thing as "jihad bil saif", or jihad "by the sword", many modern Islamic scholars usually say that it implies an effort or struggle of a spiritual kind.

29. Sharks can actually suffer from cancer. The misconception that sharks do not get cancer was spread by the 1992 book Sharks Don't Get Cancer by I. William Lane and used to sell extracts of shark cartilage as cancer prevention treatments. Reports of carcinomas in sharks exist, and current data do not allow any speculation about the incidence of tumors in sharks.

30. Henry Ford did not invent either the automobile or the assembly line. He did improve the assembly line process substantially, sometimes through his own engineering but more often through sponsoring the work of his employees. Karl Benz ( co-founder of Mercedes-Benz ) is credited with the invention of the first modern automobile, and the assembly line has existed throughout history.

31. Sushi does not mean "raw fish", and not all sushi includes raw fish. The name sushi means "sour rice", and refers to the vinegared rice used in it.

33. "Golf" did not originate as an acronym of "Gentlemen Only, Ladies Forbidden". The word's true origin is unknown, but it existed in the Middle Scots period.

34. It has been widely believed that Macintosh computers are immune to malware, such as viruses, though recent developments are correcting this belief. Although much less frequently than computers running Microsoft Windows, they can and do get malware.

36. The notion that goldfish have a memory span of just a few seconds is false.

37. Eating nuts, popcorn, or seeds does not increase the risk of diverticulitis. These foods may actually have a protective effect.

38. Hair care products cannot actually "repair" split ends and damaged hair. They can prevent damage from occurring in the first place, and they can also smooth down the cuticle in a glue-like fashion so that it appears repaired, and generally make hair appear in better condition.

39. A common misconception about chameleons and anoles is that they change color primarily for camouflage. In reality, they usually change color to regulate temperature or as a form of communication. Some species, such as the Smith's Dwarf Chameleon, do use color change as an effective form of camouflage.

40. Islam does not breed terrorism. In fact, terrorists tend to be non-faithful individuals, who are drawn to radical peer groups for political or personal but not religious reasons, according to the British intelligence agency M15.

41. Eating less than an hour before swimming does not increase the risk of experiencing muscle cramps or drowning. One study shows a correlation between alcohol consumption and drowning, but there is no evidence cited regarding stomach cramps or the consumption of food.

42. The Big Bang theory does not provide an explanation for the origin of the universe; rather, it explains its early evolution.

43. There is no evidence that coffee stunts a child's growth.

44. Swallowed chewing gum does not take seven years to digest. In fact, chewing gum is mostly indigestible, and passes through the digestive system at the same rate as other matter.

45. There is no physiological basis for the belief that having sex in the days leading up to a sporting event or contest is detrimental to performance.

46. Abner Doubleday did not invent baseball.

47. Due to media images of the effects of AIDS, many people believe that individuals infected with HIV will always appear a certain way, or at least appear different than an uninfected, healthy person. In fact, disease progression can occur over a long period of time before the onset of symptoms, and as such, HIV infections cannot be detected based on appearance.

48. Edelweiss is not the national anthem of Austria, but is in fact an original composition created for the musical The Sound of Music.

49. George Washington Carver did not invent peanut butter, though he reputedly discovered three hundred uses for peanuts and hundreds more for soybeans, pecans, and sweet potatoes.

51. Osteoporosis only affects women is a myth. Osteoporosis affects men and women, both. The only reason why men are considered safe from osteoporosis is because they have larger skeletons and they are not physically affected by menopause. This means that bone health detiorates at a slower pace in men, than in women.

52. The fruit eaten by Adam and Eve in the garden of Eden was an apple Suppose the entire story is true, but nowhere is the type of fruit mentioned.