Justin Drew Bieber is a Canadian singer - songwriter, musician, and actor. Bieber was discovered in 2008 by American talent manager Scooter Braun, who came across Bieber's videos on YouTube and later became his manager. Bieber has received numerous awards, including Artist of the Year at the 2010 American Music Awards, and was nominated for such accolades as Best New Artist and Best Pop Vocal Album at the 53rd Grammy Awards. Justin Bieber is considered as the best teen celebrity of this 21st century. Here we have collected hundred interesting facts about Justin Bieber. For more facts visit TheFactSite.com 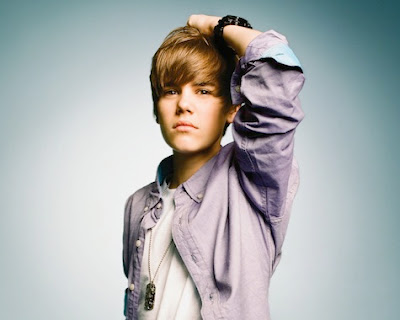 2. He shares the same birthday with Ke$ha - 1st March.

3. Teenage boys are paying $150 to get Justin's hairstyle!

4. Justin's My World album went platinum only 3 months after it was released.

6. As of October 2009, Bieber accumulated over 9 million YouTube channel views.

7. When he was 12-years old finished second in a local singing competition called Stratford Idol.

8. Originally started posting videos so that his friends and family could watch him perform.

9. Justin can play the drums, guitar, piano and trumpet.

11. Justin Bieber gets about 6 hours of sleep each night because of his busy schedule.

13. Justin 3rd album is called Under The Mistletoe.

14. Justin Bieber's mother wanted to be an actress when she was younger.

15. Justin once kissed a poster of himself and said "Yup, I'm a great kisser".

17. Justin gets about 60 new mentions on twitter per second whether he tweets or not.

20. Justin used to be scared of thunderstorms.

22. Justin once admitted that he cried because of the haters comments.

25. His favourite animal is a giraffe.

26. Justin Bieber got a main road named after him, after an 11 year old girl was major of Forney for a day.

27. Justin's parents divorced when he was 11 months old.

29. Justin appeared in an episode of CSI on 23rd September.

30. Justin has claustrophobia and he’s really afraid of elevators.

32. His favourite colour is purple.

33. Justin is the most searched person on the Internet.

34. According to BOP magazine, 86% of girls would cry if Justin Bieber shaved his head. 14% would cheer and throw a party.

36. Justin purchased his Iron Man helmet at 3 in the morning.

37. The music video director of Swift's 'You Belong With Me' also directed the 'One Less Lonely Girl' music video.

38. A contest on which country Justin should tour was rigged by haters, putting North Korea as the lead country.

39. President Obama revealed that he doesn't have Justin Bieber on his iPod.

40. Justin got his tattoo done at the Son of a Gun tattoo parlour in Toronto.

42. Justin drove P-Diddy's white Lamborghini around LA to get some frozen yoghurt with Sean Kingston.

44. While filming the 'One Less Lonely Girl' music video, the puppy in the video peed on Justin.

45. Justin used to take karate classes when he was younger.

47. Justin's tutor, Jenny, has never given out her last name, and always asks to keep it private.

48. When in Germany, Justin practiced German by telling a fan "Ich Liebe Dich" (I love you), and she fainted.

49. If Justin’s water bottle has water at the end of concerts, he throws it in the crowd.

53. Justin has been claustrophobic since the age of 7.

58. Justin said if he had to pick a favorite Jonas Brothers song it would be "Inseparable".

60. Justin once got pissed off at a fan and told her to "suck his dick".

61. Justin loves the show 'Friends' and grew up watching it because his mother loved it.

62. Even though Justin's eyes are light brown/hazel, they turn greenish in the sunlight.

67. Justin is fluent in French but when asked to sing a French song in an interview, he sang Frère Jacques - the nursery rhyme.

68. Justin once had a dream that a cat ate him, that's why he doesn't like cats.

69. Justin used to Skype with fans last summer during his radio tour.

70. Justin got really annoyed with the girl in the 'Eenie Meenie' music video, because she couldn't dance.

71. Two haters bought backstage passes to tell Justin that his parents divorce was his fault.

72. There are 18 people named Justin Bieber in America.

73. Jazzy, Justin's little sister calls him 'Boo Boo' when she needs something.

74. Justin can juggle, do a front flip and back flip.

75. Justin has once tripped over his own hockey stick, while trying to impress a girl while playing hockey.

76. While in Tokyo, Japan, the first phrase Justin learnt was "Can I have your phone number?" and then he learnt 'I love you'.

77. Justin didn’t shed a tear when he got his tattoo, and said it hurt, but not that bad.

79. Justin says he has never drunk alcohol and doesn't want to try it.

82. Joe Jonas once said "thank you" to a girl wearing a top that said I ♥ JB. He didn't realize the JB actually meant Justin Bieber.

85. The song playing in the background of Justin's first kiss was "How to Save A Life" by The Fray and Bieber said it was "magical".

86. A rumor once circulated that Justin was dead and another one said he committed suicide on July 31.

87. Justin didn't want to wash his face after Rihanna kissed him.

88. On September 2, 2009, Justin Bieber was a trending topic for one of the first times and he was thrilled.

92. Justin has been best friends with Ryan since they were 7.

93. Sometimes Justin wears a dog tag given to him by a fan. It belonged to a fallen soldier, Justin wears it as a memorial.

94. Justin once held up a sign from his hotel room window saying "Go to McDonalds and get me a Big Mac".

96. Justin's dad is the person who taught him how to drive.

97. Justin's friends reveal he is always pranking people on Chatroullete.

98. Justin has been a victim of cyber bullying.

100. Justin goes to church and is a Christian.