7 New Uses for a old Penny 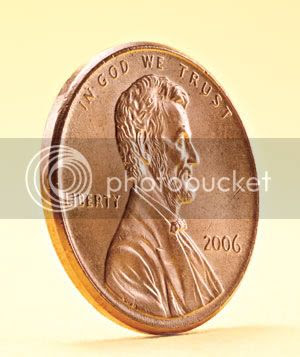 Make an opening in the bottom hem, slide in a penny or two, and sew the hem back up to keep curtains hanging level and stick-straight.

Insert a penny into a groove of a tire with Lincoln’s head pointing into the tire. If the groove covers part of his head, you’re safe to drive; if the head is in full view, it’s time for new wheels. (The distance between the rim of a penny and Lincoln’s head is 1/16 of an inch―the minimum suggested tread depth.)

If you dine out and the table is unsteady, put a coin under the leg to restore balance.

Misplaced the thimble? No problem. Sub in a cent.

Use a penny to screw open a toy’s battery pack.

Hand out pennies at your next gathering and ask each guest to share a story that happened during the year his or her penny was minted. If the coin predates a friend, let the person improvise.

To ward off algae, toss in a few pre-1982 coins; the high copper content retards growth.

Email ThisBlogThis!Share to TwitterShare to FacebookShare to Pinterest
Labels: ideas