1. Pakistan’s Javed Miandad clashed with Australia’s Dennis Lillee in one of the most disgraceful incidents on a cricket field. Lillee and Javed collided as the batsman completed a run during the November 1981 Perth Test. Lillee proceeded to kick Javed on the leg to which Javed reacted angrily, threatening to hit the bowler with his bat. Umpire Tony Crafter stepped between the two as Lillee prepared to have another go at Javed. The blame for the incident was laid on Lillee by many experts. Former Australian captains like Bob Simpson and Ian Chappell condemned Lillee’s behaviour. 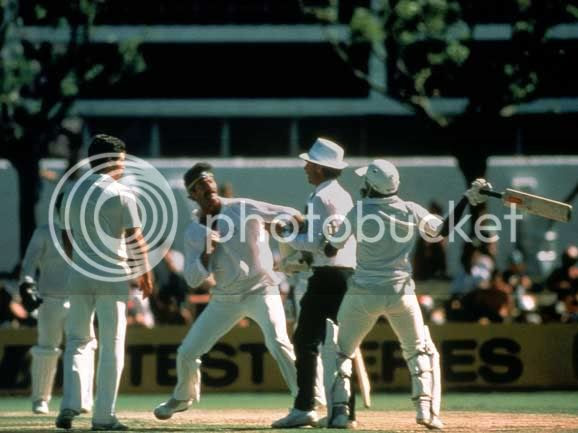 2. In Birmingham, August 7 2005, at the end of one of the greatest Test matches ever, England all-rounder Andrew Flintoff broke away from the team celebrations to console the dejected Australian batsman Brett Lee. Lee and Michael Kasprowicz had brought Australia within three runs of an unlikely win before Kasprowicz got out. England went on to win the Ashes for the first time in 19 years, but this moment stood out and Flintoff was applauded for his thoughtfulness. Despite intense rivalry between the two teams, Flintoff and Lee remain mates. 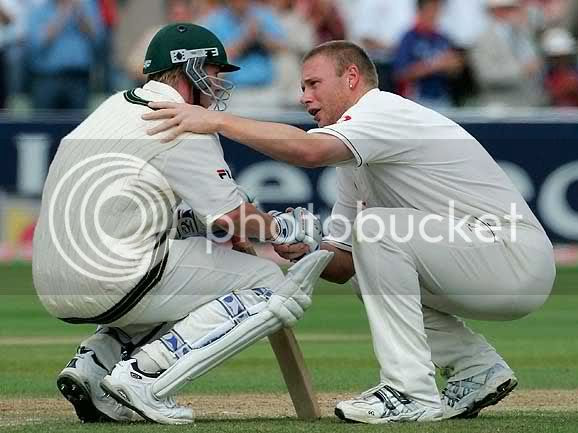 3. India’s Yuvraj Singh hits the sixth six of an over from England Stuart Broad on September 19 2007 at Kingsmead, Durban during a World T20 match. Yuvraj became just the fourth batsman in history to hit six consecutive sixes in an over in senior cricket. Minutes before this incident, Andrew Flintoff had sledged Yuvraj about his ordinary form, prompting this angry outburst on Broad.

4. In a decidedly one-sided series, Australia employed eight slip fielders in a one-day international against Zimbabwe at the Harare Sports Club on October 23, 1999. Australia were the world champions and dominant team while Zimbabwe were one of the weaker teams. Never one to miss a chance to show who's boss, Australia employed this extravagantly attacking field. They won the only Test by 10 wickets and all three ODIs. 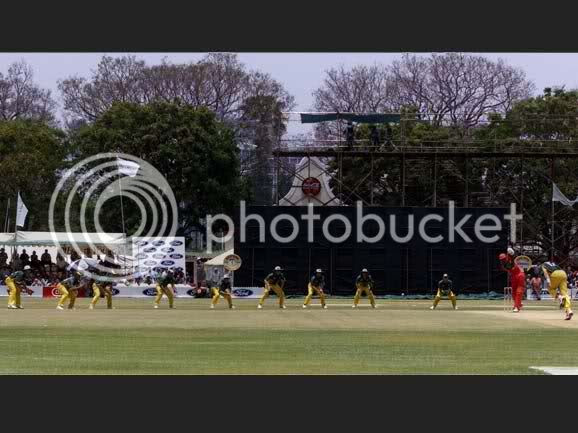 5. Manoj Prabhakar pats Sachin Tendulkar at the end of the Manchester Test match against England on August 11, 1990. The two Indians’ rearguard action saved India the Test with Tendulkar making an unbeaten 119 – his first Test hundred. Tendulkar, 17, thus became the youngest Indian to score a Test hundred, and would go on to claim most batting records in international cricket. 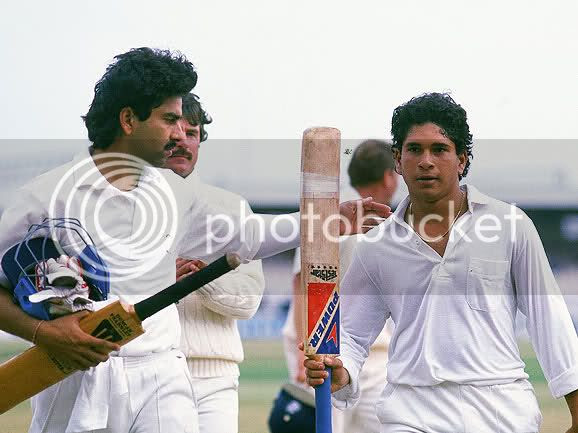 6. Sachin Tendulkar is given out LBW on zero to Glenn McGrath after being struck on the shoulder, making this one of the most controversial LBW decisions. Tendulkar ducked thinking the ball to be a bouncer and was hit in front of the stumps. Australian umpire Darryl Harper ruled it out, making it the only known instance of a shoulder-before-wicket dismissal. 7. England all-rounder Ian Botham is seen in a reflective mood, smoking a cigar in the dressing room. Botham had made 149 against Australia in the Leeds Test match of 1981. Despite following on, England turned the game around with Botham’s heroics with the bat and Bob Willis with the ball. England won the series often called Botham’s Ashes for his complete dominance of Australia. 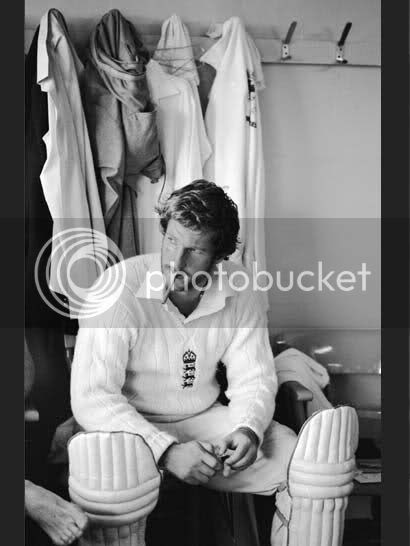 8. Sri Lanka captain Arjuna Ranatunga has a heated conversation with umpire Ross Emerson, who had no-balled Muttiah Muralitharan for throwing in an ODI against England, January 23, 1999, in Adelaide. Ranatunga led his team off the ground and threatened to abandon the tour since Muralitharan’s bowling action had earlier been deemed legitimate by the ICC. Play resumed after 14 minutes. England made 302. Tensions between the teams simmered till the end when Roshan Mahanama was shouldered by captain Alec Stewart. In poetic justice, last-man Muralitharan came out to bat in the final over to hit the winning runs. 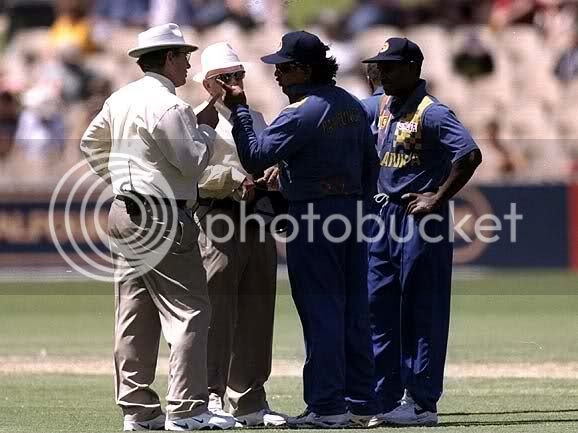 9. Australian players celebrate after running out South Africa’s Allan Donald in the World Cup semi-final in Birmingham on June 17, 1999. A massive misunderstanding in the final over between last-man Donald and Lance Klusener, who had batted heroically to bring SA within a run of a win, ended the game in a tie. Tournament rules allowed Australia to reach the final, which they won, beginning their decade-long domination of international cricket. 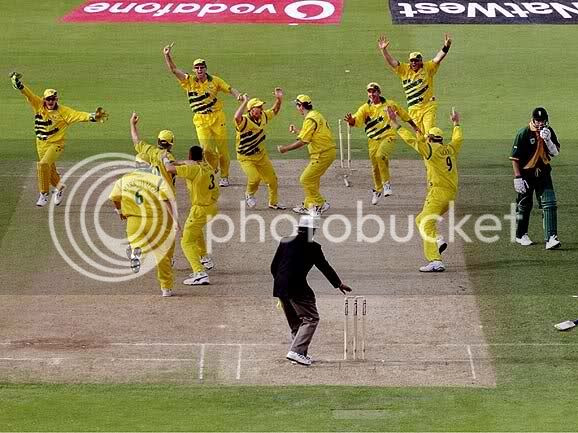 10. West Indian players give Brian Lara a guard of honour on April 18, 1994, in the Test match against England in Antigua. Lara beat the world record for the highest Test score --- 365 held by fellow West Indian Garry Sobers --- and made 375, a record that stood nine years. 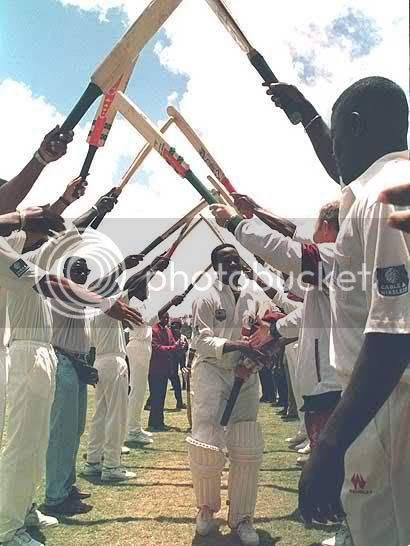 11. England’s John Lever is seen with a Vaseline-soaked gauze over his eyebrows during the Test series in India in 1976-77. The reasoning was this helped prevent beads of sweat entering his eyes. Lever took 7-46 on Test debut in the first Test in Delhi, swinging the ball in unhelpful conditions. During the third Test in Chennai, Indian captain Bishan Singh Bedi accused Lever of cheating by shining the ball using Vaseline. Lever wasn’t punished, but India lost the series 1-3. 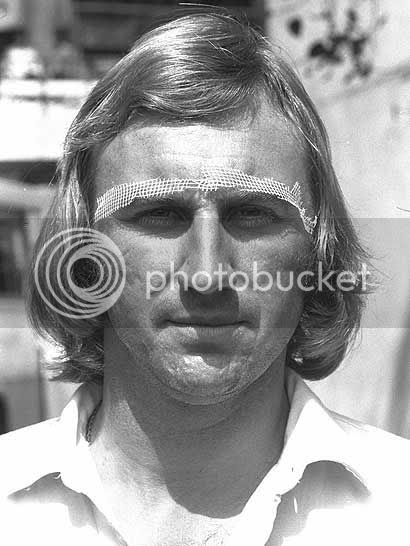 12. February 9, 1980, saw scenes that have rarely been seen on a cricket field. West Indies, on short tour to New Zealand, felt the umpires were biased. In the first Test in Dunedin, Michael Holding knocked over the stumps at the striker’s end after a caught-behind was turned down by umpire John Hastie. “This was not cricket and I didn't have to be part of it. I was on my way to the pavilion, quite prepared not to bowl again, when Clive Lloyd and (Deryck) Murray persuaded me back,” Holding said. Later in the tour, Colin Croft shoulder-barged umpire Fred Goodall while running in to bowl. It marked the lowest point in the cricket relations between the two teams and the only incident where an umpire was assaulted by a player in an international game. 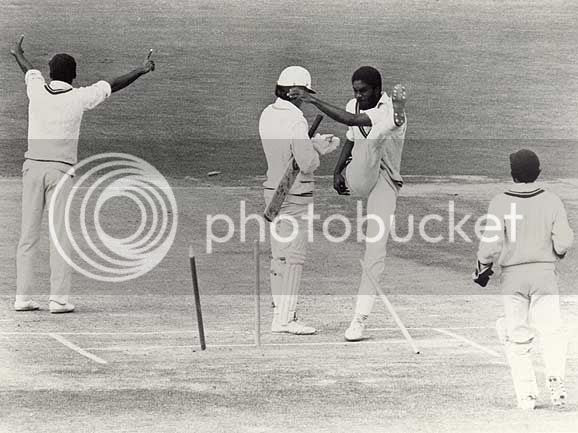 13. England captain and Pakistani umpire Shakoor Rana were embroiled in an angry, nose-to-nose, finger-wagging exchange on December 8, 1987, in Faisalabad. England were miffed with Pakistani umpires in the series when things boiled over with this incident. Rana accused Gatting of cheating by moving a fielder while the bowler was running in. Abuses were exchanged. Rana refused to umpire without a written apology from Gatting. Gatting demanded the same for being called a cheat. Day 3 was lost entirely with England in a strong position to level the series. Gatting grudgingly apologized at the behest of the England board. 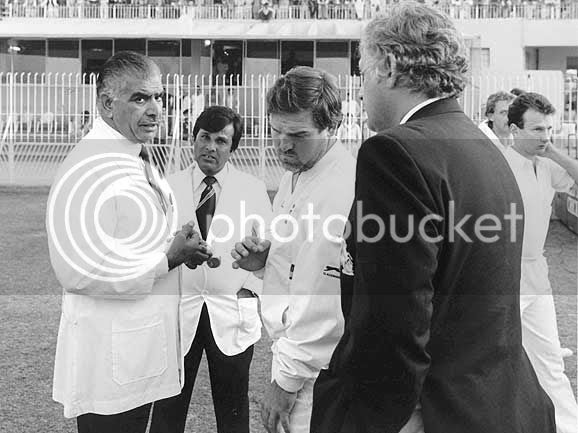 14. BBC employees were on strike hence there’s no video recording of one of the greatest knocks in one-day cricket. On June 18, 1983, in Tunbridge Wells, India captain Kapil Dev came out to bat against Zimbabwe with the score reading 9-4 (soon to be 17-5). Kapil proceeded to pound 175 off 138 balls with 16 fours and six sixes, establishing a new record score for ODIs. India’s qualification to the semifinal was on the line. They beat Zimbabwe here. Revitalised by Kapil’s feat, India went on to stun West Indies in the final. 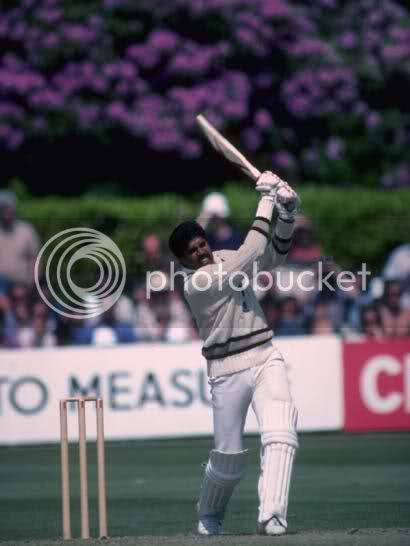 15. On March 22 1992, the scoreboard at the Sydney Cricket Ground tells the story as England win a controversial rain-affected World Cup semifinal against South Africa. Rain stopped play when South Africa needed 22 runs off 13 balls. Two overs were lost and according to the much-despised rain rule, the target was reworked to 22 off 1 ball). It’s been 19 years since the incident and South Africa are yet to win a knock-out match at the World Cup. 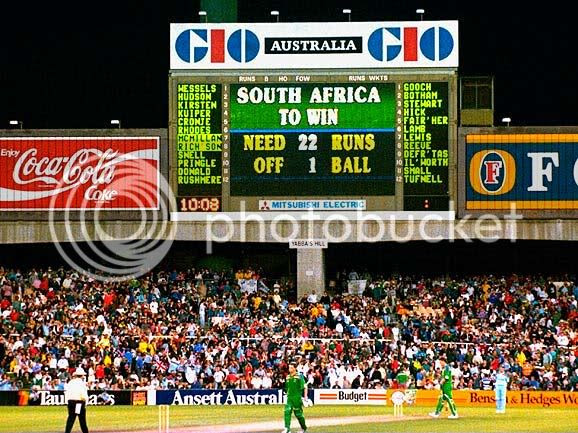 16. The scoreboard at the Pietermaritzburg Oval in South Africa during this February 14 2003 World Cup game makes astonishing reading. Sri Lanka paceman Chaminda Vaas had reduced Bangladesh to 5-4 in the first over, taking all four wickets. Vaas took a hat-trick with the first three balls of the game, setting up a 10-wicket win. 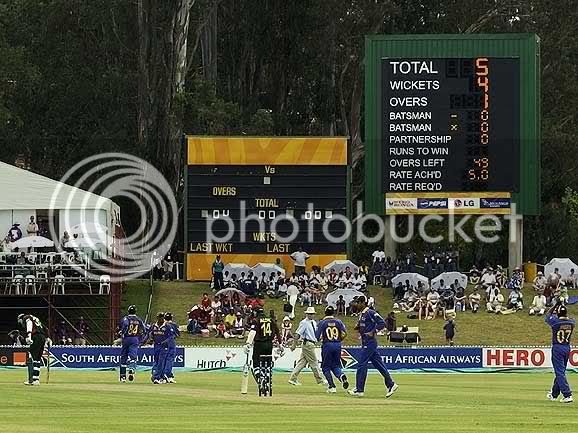 17. Umpires Max O’Connell and Donald Weser persuade Australian batsman Dennis Lillee to swap his aluminium bat for a standard wooden one. In the 1979 Ashes Test at Perth, England captain Mike Brearley noticed the ball had gone out of shape since Lillee’s arrival at the crease. There was no stipulation against aluminium bats so Lillee didn’t budge. Australia captain Greg Chappell had to come out to intervene. Lillee finally threw away his bat in anger. 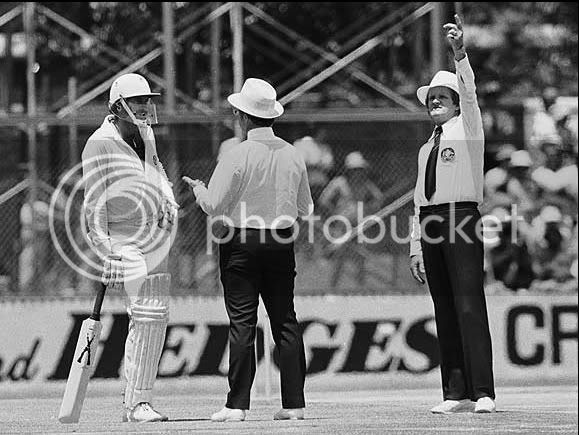 18. Helmets with visors were a rarity for long. On February 18, 1986, in an ODI in Kingston, Jamaica, Mike Gatting was struck on the nose by a bouncer from West Indies’ Malcolm Marshall. The story goes that the ball came back with pieces of Gatting’s nose bone dislodged on it. 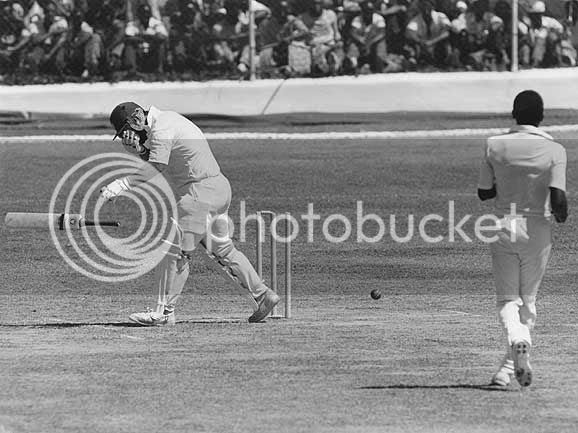 19. Murmurs about his action were abound but this was the first time the unorthodox spinner Muttiah Muralitharan was no-balled for throwing. Umpire Darrell Hair laid down the law on Boxing Day at the Melbourne Cricket Ground in 1995. Cricket would never be the same again. Sri Lanka would emerge stronger from the incidents of the tour to beat Australia in the World Cup final a few months later 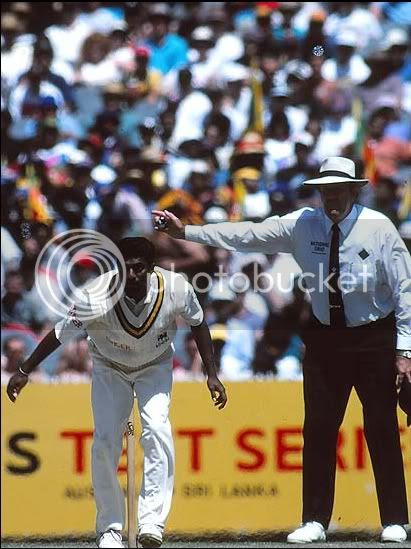 20. Captain MS Dhoni swings the six that ended India’s 28-year wait for a World Cup. In the final against Sri Lanka at Mumbai’s Wankhede Stadium, an out-of-form Dhoni promoted himself up the order. He made an unbeaten 91, sealing a memorable win. 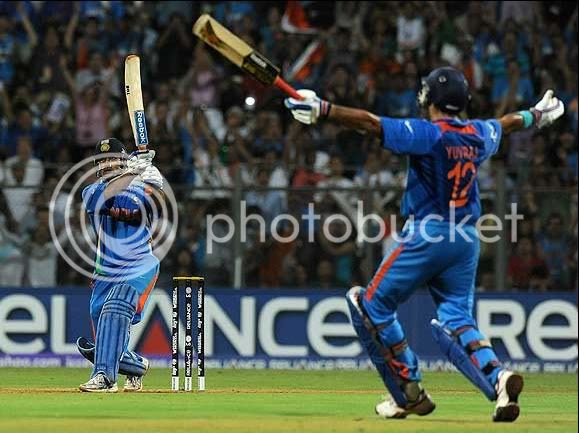 21. Richie Benaud said this the most disgraceful thing he had seen on a cricket field. On February 1, 1981, New Zealand were playing Australia in the third of the best-of-five finals of the World Series in Melbourne. 15 were needed off the final over, to be bowled by Trevor Chappell, younger brother of Ian and Greg. It came down to seven off the last ball with Brian McKechnie on strike. Captain Greg instructed Trevor to roll the ball along the ground. Underarm bowling was still legal, even if unethical, and Chappell’s unsporting act was roundly criticised. After the incident, underarm bowling was banned. 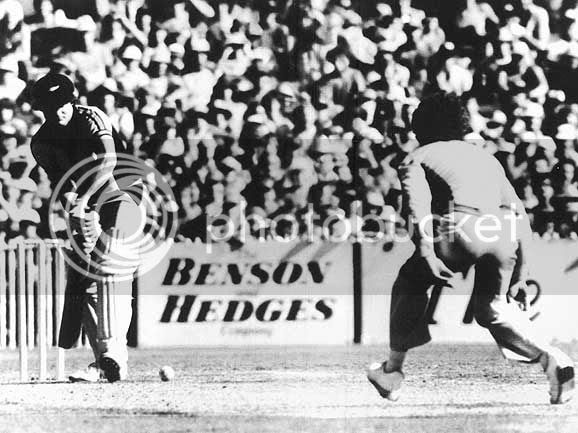