1 - Power comes from a 6.5-litre diesel engine that's fitted with a supercharger to help haul this beast around. Yet despite this mammoth power plant, the top speed is only 60mph and it takes around 15 seconds to reach this. 2 - It is based on a GM truck chassis and weighs a staggering 6,350kg. To put that in context, the Rolls-Royce Phantom, one of the biggest cars on the road, weighs a paltry 2,550kg in comparison. This will be why the Obamobile only averages 8mpg. 3 - A lot of the weight comes from the Armour protection. The body is made up of steel, aluminum, titanium and ceramic. 4 - The glass is five-inches thick and only the windscreen opens, to allow the driver to talk to secret service running alongside or to pay a toll. It is also hermetically sealed to secure it from chemical attack. 5 - Should the worst happen, The Beast has its own oxygen supply. 6 - The military-grade Armour means the doors are eight-inches thick and weigh as much as a Boeing 747's. 7 - The doors are so thick that Obama can't hear any outside noise, so speakers are built in to play the ambient sound of the crowd. 8 - The underside is reinforced with a Kevlar mat to protect Caddy One from bomb attacks. 9 - The fuel tank is leak proof and filled with special foam that prevents it from exploding, even in a direct hit. 10 - There are two holes in the front bumper that can emit tear gas and fire smoke grenades. 11 - There is also an infrared video system for the driver to drive through smoke and night vision cameras for driving in darkness without lights. 13 - The Beast has a firefighting system located in the boot. 14 - Also in the boot is a bank of the president's blood that iscarried at all times and when he goes out an ambulance always follows close behind. 15 - Obama gets a presidential limo built to this specification every four years and the old ones are handed down to vice presidents and visiting heads of state. 16 - The Obamobile can seat seven, with two seats up front, three rear-facing ones in the middle, and two at the very back, one for the president and the other for a guest. 17 - Inside, Obama isn't deprived of his creature comforts; a 10-disc CD player is among the features, as well as sophisticated electronic communications with direct phones to the White House and internal Internet. 18 - Defence systems include a pump-action shotgun in a compartment beside the driver. 19 - The tyres are reinforced with Kevlar and can run when flat. If the tyres are missing, the steel rims have been designed to allow the car to keep on driving at Speed. 20 - Unlike previous presidential cars, Caddy One has no specific model name. 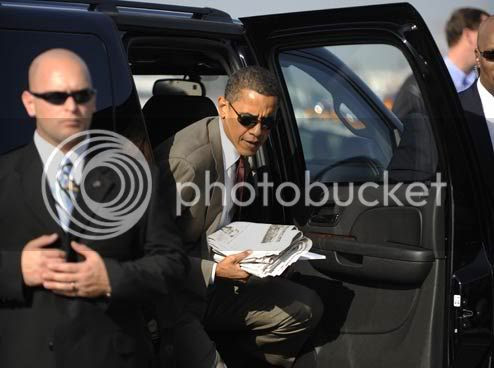