The completion of the world's largest Qur'an was hailed as a major achievement for the Afghanistan when it was officially unveiled in the nation's capital. Measuring more than 7ft long and 10ft wide, the text's 218 pages are decorated in 30 different calligraphy designs and took almost five years to finish. 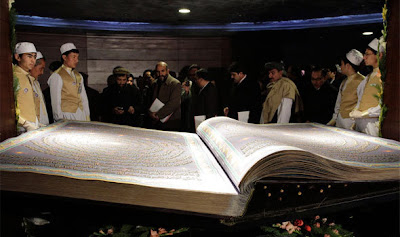 Its inauguration ceremony was held yesterday in front of key religious figures, clerics, scholars and government officials to coincide with the opening of Hakim Nasir Khusraw Balkhi Cultural Center and arts exhibition in Kabul .

The lavish book, with pages measuring 2.28 meters by 1.55 meters, has been certified as the world's largest by the Afghan ministry of Haj and religious affairs, according to the Kabul cultural center that houses it. 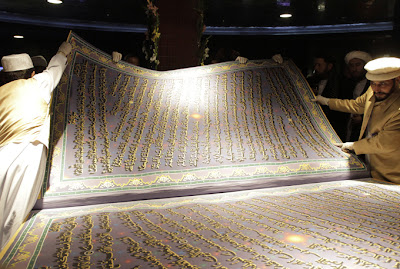 The previous claim to the title was for a copy unveiled last year in Russia's Tatarstan region.
The Afghan Qur'an weighs 500kg and its 218 pages of cloth and paper, bound inside an embossed leather cover made from the skins of 21 goats, cost over £300,000 to create.

Mohammad Sabir Khedri, the master calligrapher behind the project, worked with nine students on a design that combines gold script with millions of tiny colorful dots, forming highly symbolic decorations around the giant pages. 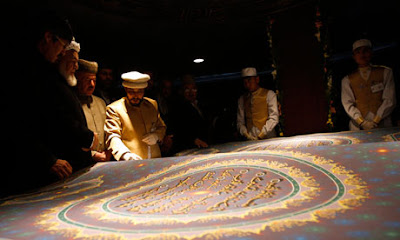 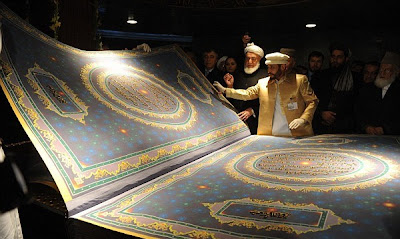 "I wanted to use as many tasteful colors as possible to make this holy book look beautiful," he said, standing beside his enormous creation in a room built specially to house it. Khedri not only created the masterpiece, he managed to keep it a secret for over two years. It was finished in 2009, but the binding and room to house it were not ready until the start of 2012, when it was finally unveiled. 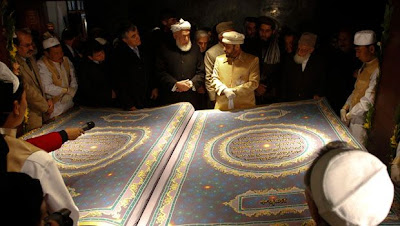 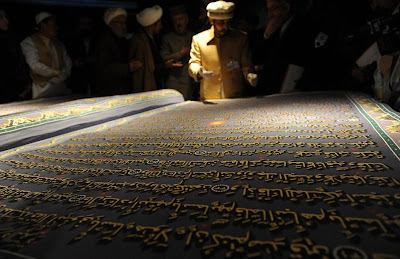 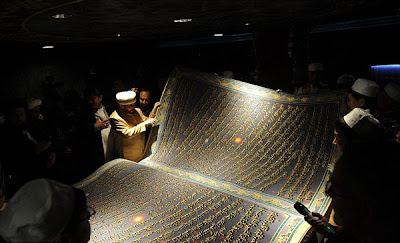 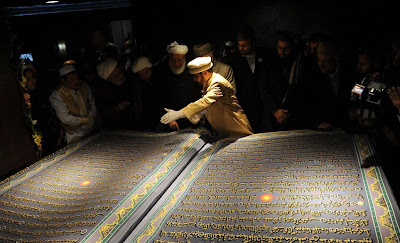 More About The Holy Qur'an:

The Qur'an is the central religious text of Islam and is a record of the exact words revealed by God through the Angel Gabriel to Muhammad. Muslims believe it was periodically revealed to Muhammad over the 23 years before his death at the age of 40 in 632AD. It is divided into 114 suras which are classified either as Meccan or Medinan depending upon their place and time of revelation.