Time is the one, when lost, we can not get it back. A watch is a timepiece, typically worn either on the wrist or attached on a chain and carried in a pocket. And wrist watches are the most common type of watch used today. There a wide range of wrist watches from the best brands of designer watches, luxury watches, sports watches and much more. But now a days there are lot of features which are in-build in these watches, despite these features there are few watches that stand out on the top for it's uniqueness. Now let's take a look at the 15 creative and unique wrist watch designs... This watch is still a design for now but the coolest watch you could ever own. This watch design could reinvent our whole perception over watches. The projects comes from a design contest organized by Timex to get new ideas for their future projects. The Nail Watch, as they naturally called it, allows you to check the time with just a quick glance over your arm. It will show up in different modes, calculator, date, calender etc and an option to chose the color. This would probably be the most stylish watch and all popular companies would cry if it hits the markets. Tiwe OLED Wrist Watch works by displaying a series of dots across the watch's face that appear to float around in a wholly random fashion until you either shake the watch or tap the screen at which point the OLED dots will quickly assemble from their chaotic meanderings to form order hence displaying the current time in an analogue style before timing out and floating away back into chaos again. Let's Shake the Watch to Form the Time from Chaos. 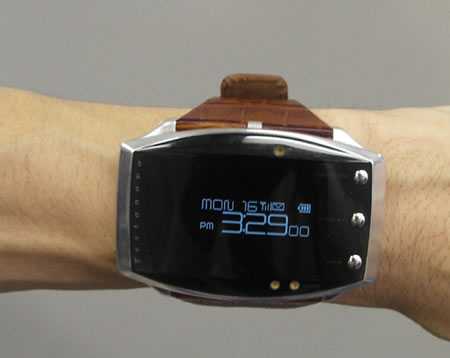 This Seiko watch not only tells time, it notifies you when a call or text message is received on your phone via Bluetooth. It also displays the battery level and network signal strength. SII (Seiko Instruments) in Japan has done a prototype of their bluetooth watch for mobile phone users. The bluetooth watch can connect to mobile phone and display important information on the watch. 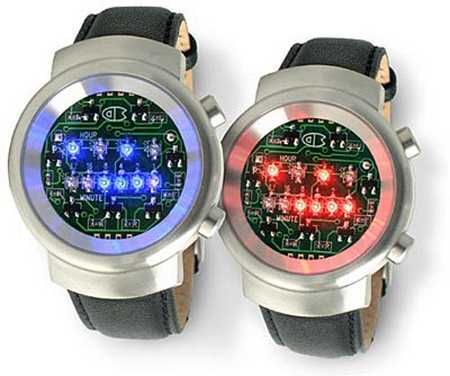 If you want to be the absolute computer geek, then this watch can't miss from your wirst. But first you need to learn the binary language, if you don't already know, because else you won't be able to read the time. 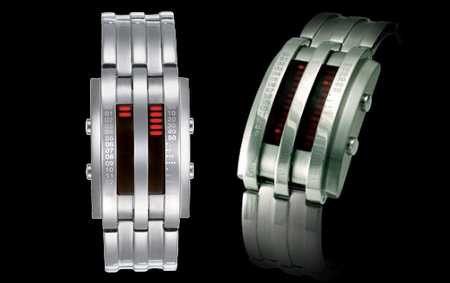 The Circuit Watch uses a pair of tall stacked LED segments to illustrate the current time. The bars on the left show the current hour, while the bars on the right display appear to be split into two sections, one which displays tens of minutes and the other which shows individual minutes. 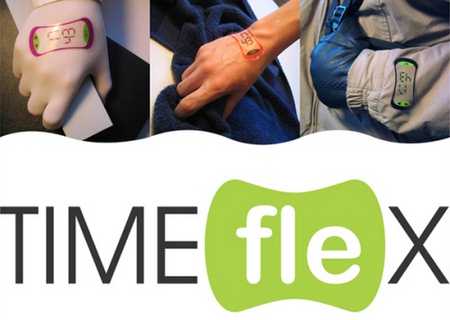 This is a self-gumming watch, that can be attached to virtually anything, from your hand to a jacket. The aoTimeFlexa is based on the flexible display technology and it can be bend and rolled like a paper. It also features touchscreen, so it doesn't have any physical buttons. Being very slim and small, it can be used in any situation. 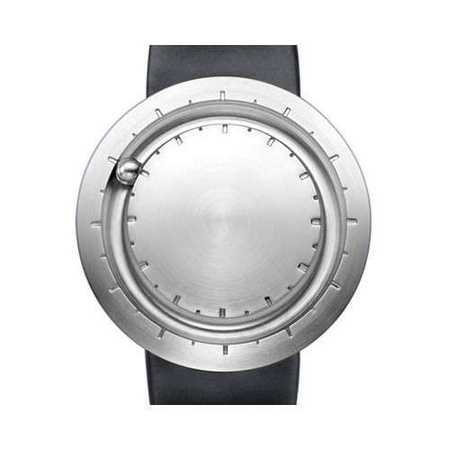 Wrist watches really don't get any more minimalist than the Abacus Hands Free Ball Watch which is an entirely hands free affair, relying instead on a single metal ball to convey the time thanks to the use of a concealed magnet. Not a watch for those who cannot live without knowing the exact time but ideally suited to those seeking a stylish watch that offers a rather more casual relationship with time telling. 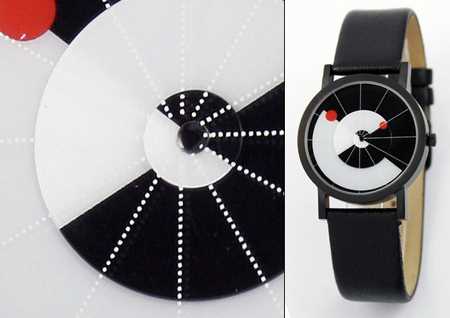 Inspired by aircraft instrumentation, in particular an aircraft's artificial horizon instrument, the Equilibrium Wrist Watch is a purely analogue affair designed by Daniel Will-Harris that offers a â€˜sense of perspective to an ever-shifting horizon'. 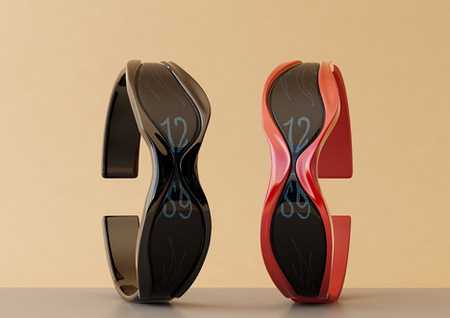 There are two names of this watch: one is Liquid Time and the other is From nowhere to nowhere. Liquid Time utilizes two LCD screens specially crafted to fit the watch as well as some very clever typography. 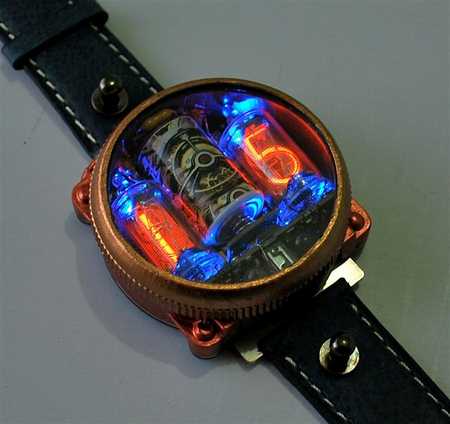 This watch looks designed especially for science geeks, because it displays the time on nixie tubes. For those that don't know what nixie tubes are, they were used back in 1969 in calculators and are quaint neon display tubes. This watch only requires the flick of the wrist to display the hours, minutes in seconds in a sequence. It's advantages are that it's both rugged and water resistant. The Nixie Watch is great somebody that wants to be unique. 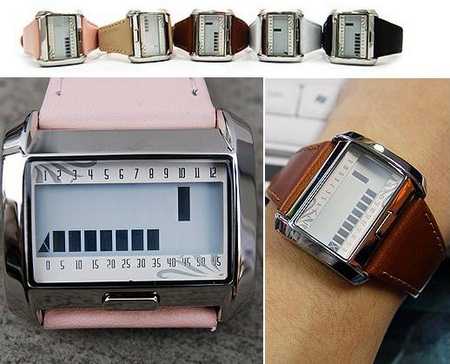 A deliciously retro inspired LCD wrist watch, the Matrix M6001 LCD Wrist Watch manages to ooze yesteryear appeal whilst offering highly original and distinctive styling which is not an easy feat. Managing to be both understated and yet gloriously glam, though we're not quite sure how this has been accomplished, the Matrix M6001 is, beyond all doubt, a retro fuelled masterpiece. 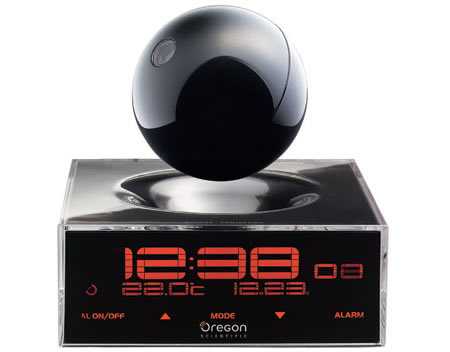 At $150, the Giovannoni Timesphere is a nifty alarm clock well yes not a watch practically though, however is capable of projecting the time onto any surface via a wireless orb. While sitting on the base, the wireless floating orb is charged through induction and once it is completely charged feel free to place it wherever and fix the point where you want time to be focussed. The orb will project the time onto a wall or surface or your wrist and easily be lost when kicked or played with by a dog. 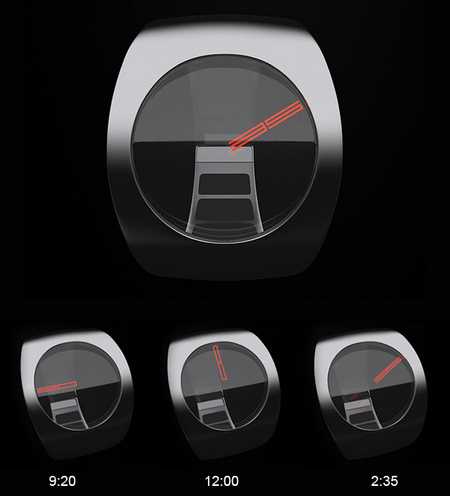 On air wrist Watch shows time in an extraordinary minimal way. While LED display shows minutes in number, its position shows us the current hour. Display is also function as a light and set button. If you push once LED lights up. To set the time you need just to push in the center of the display for 5 seconds and LED flashes, here you push upper or lower corner of the display to set the hour and the left and right corner to set minutes. 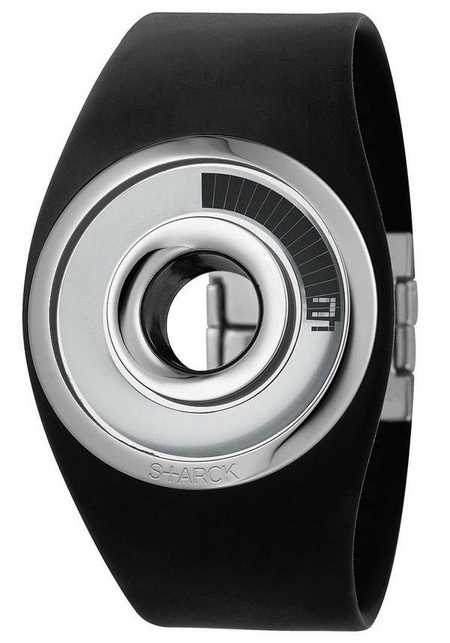 This digital style watch displays the time in a unique fashion. In a ring shaped display, the hours are displayed as numbers while the minutes are displayed in segments. As time goes by, the segments build making a complete ring every hour. The center is completely see through and the pusher is located on the case back to create this sleek styling. 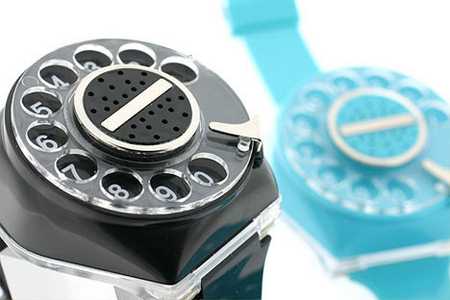 This is one strange watch you probably wouldn't like to wear, especially if you're not Japanese. Excepting it's huge, it looks like an old phone and you need to dial 117 to hear the time in Japanese. You can watch the video in source to understand better what are we talking about.